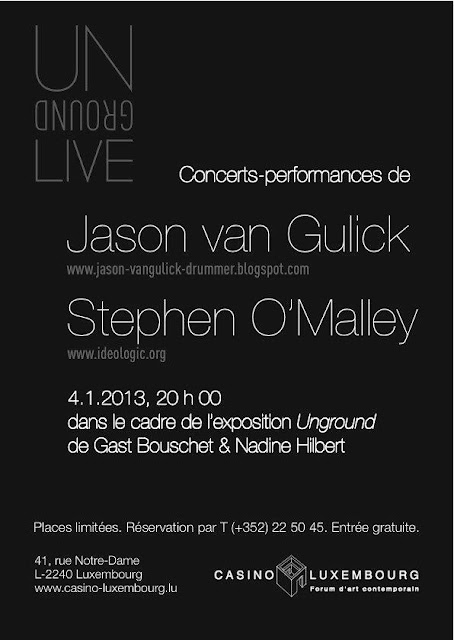 The sound piece is this time a "all in one" remix, adapted for the occasion, same content, but presented totally differently. Those who missed it in Venice have a chance, the exhibition runs until mid february!

"In our tridimensional works and performances, we appropriate certain iconic elements of urban life and modernist architecture. We question their most seductive aspects, their popularity and alleged beauty, through emphasizing the claustrophobic and violent perspectives they often convey.

We aim to display the aestheticization of violence we perceive within those urban environments in which the body and nature are no more but mere concepts, representations, phantoms or replicas. We investigate on how the aspirations, memories and dreams of men are affected by the architectural landscape in which they evolve." 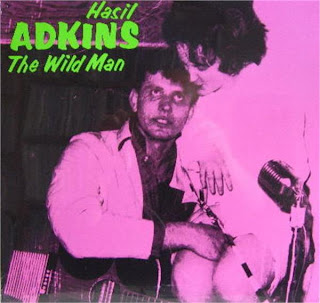 This next Wednesday (March the 14th) Y.E.R.M.O. will perform its first DJ set ever (involving live remixing) at MUDAM museum, Luxembourg.

!! Those who will miss it can already note that on the 28th, a playlist carefully selected by Xavier and I will also be played there.
Posted by y.e.r.m.o. at 4:37 AM No comments:

Vibrations of Light and Sound: to trigger seismic molecular events, to shake the wall, to break down barriers Gast Bouschet and Nadine Hilbert, film still from "Toward the event horizon," 2011.
Earlier this year Gast Bouschet and Nadine Hilbert responded to a call for entries I posted for two separate curatorial endeavors: one for the Black Metal theory journal Helvete, and the other for the film/video screening “Black Thorns in the Black Box.” I have no idea how these two artists escaped my knowledge for so long and instantly wanted to learn more about their practice.
Gast and Nadine were both born in Luxembourg and are currently based in Brussels, Belgium. They have worked together since 1990s, using a combination of photography, video, and sound to create potent social, political, and institutional critiques which they have exhibited at major international venues including the Muzeum Sztuki Lodz, Poland; Philharmonie, Luxembourg; Trienal de Luanda, Angola; Busan Biennale of Contemporary Art, South-Korea; Domaine de Chamarande, France; Casino Forum d’Art Contemporain, Luxembourg; and Camouflage Johannesburg, South Africa… just to name a few. And, in 2009 they represented Luxembourg at the Venice Biennale.
Their work enchants me. Not only for its intellectual richness, but Gast and Nadine’s incorporation of alchemical aesthetics are absolutely gorgeous, and their collaborations with noise musicians adds intense layers of somatic and psychological stimulation.
Following is an interview that I conducted earlier this month with Gast Bouschet.
Amelia Ishmael: Let’s start by talking about “Toward the Event Horizon,” the recent video and sound performance that took place October 8 at the Mudam Luxembourg. What happened here?
Gast Bouschet: Well, different things to different people, I guess. What’s important to us is the location and context of the event. Where we project our art and sorcery, what’s the nature of the game and what we are throwing out into the world. Making the video and building up the energy is a long and slow process. We went several times to London to film the financial district and shoot images in Iceland after the eruption of Grimsvötn earlier this year. The live performance itself was a quick discharge of this energy. As we believe that art is more than entertainment and has to go somewhere to produce results, we bombarded the Museum building with light and sound vibrations. Our goal was to trigger seismic molecular events within architectonic concrete and glass. We wanted to shake the wall and bring this thing down. Of course we failed.

Toward the event horizon [Live] from nadine hilbert on Vimeo. 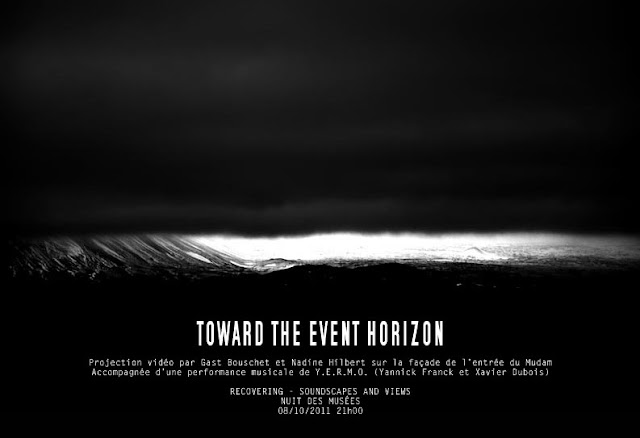